In the process of painting up my Dark Eldar vehicles and infantry for last week’s huge Apocalypse game at Warhammer World, I came across a conundrum that hits every fantasy & sci-fi wargamer in the gut: what color do I pick for my army?

For some players, this choice is easy, because you might like red, blue or green quite a bit, so you just go with that and call it a day. You can used a colored primer, give the models a quick wash and just start playing. Think about Blood Angels, Dark Angels, and Ultramarines: red, dark green, blue. Easy!

But for some armies (Dark Eldar in particular), the choice is much more wide open. I haven’t exactly been agonizing over the color choice of my army but with a big game coming up, and a desire to play with models that at least had SOME color on them forced me to finally pick what color I wanted to use. I knew the majority of the color would be black, but I wanted highlights of a color that would work as a deep, dark color yet fade up to a nice bright shade. I chose blue, specifically Ghost Tint Blue from the Badger Minitaire paint range.

With a ton of vehicles and 40 newly procured infantry models to paint, I had to use the airbrush of course. I had to finish assembling a couple of Raiders (the floaty pirate-looking ships), a couple of Venoms (the smaller ships), a pair of Razorwing Jetfighter flyers and assemble 20 infantry models (which are fantastically detailed, such great models!). Everything else had been purchased assembled off ebay, and EVERYTHING needed to be primed in black. I used Badger’s model primer, the Stynlrez black, then shaded on the white onto the leading edges of the models so it looks like they’re descending from the skies, ready to raid a city for loot and slaves (hey, just like pirates!).

After priming, this is how everything looked: 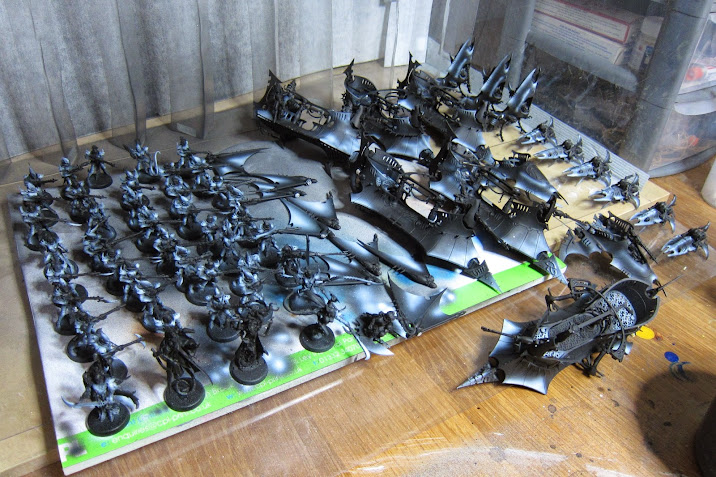 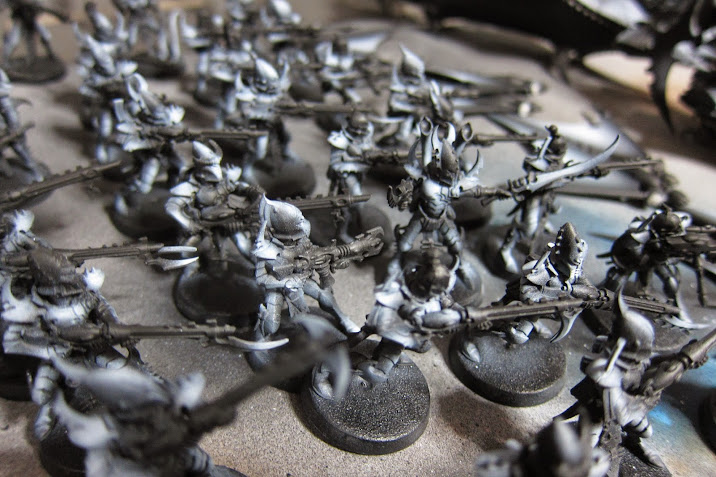 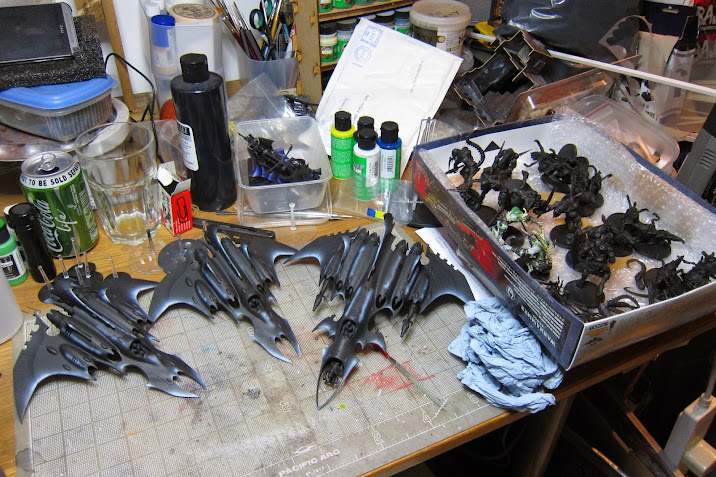 With the monochrome color in place, it was time for the Ghost Tints! The Badger Ghost Tints are fabulous – there’s over a dozen candy colors that are basically translucent paints, almost glazes, that work perfectly over white and even grey base colors. The candy colors don’t show over black unless you look very closely under very bright lighting, so they’re perfect for adding color to these Dark Eldar models.

With the Ghost Tint blue and purple, here’s how the models turned out: 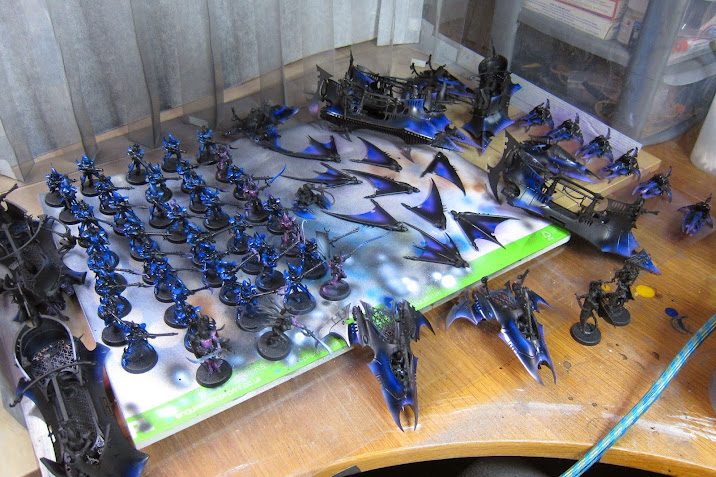 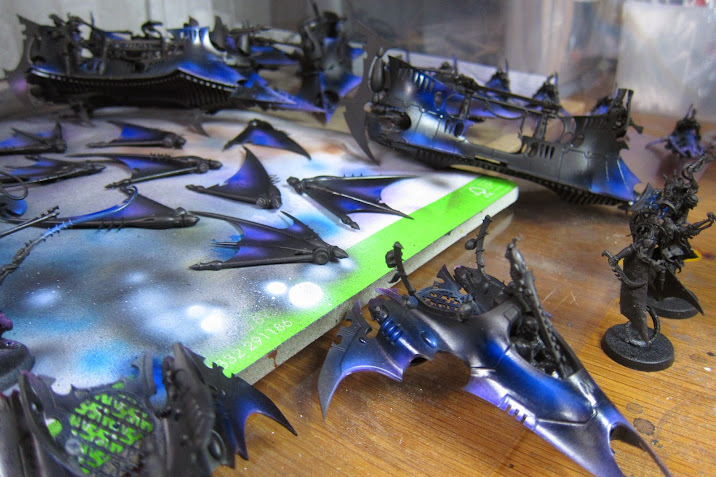 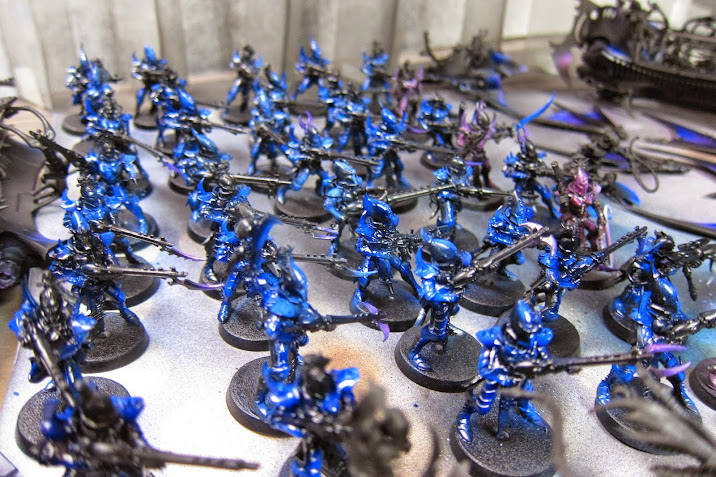 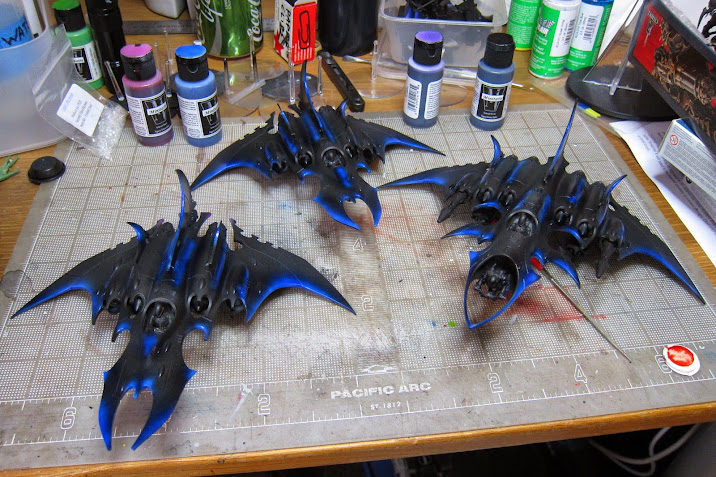 And this is how the vehicle models turned out on the table at the game: 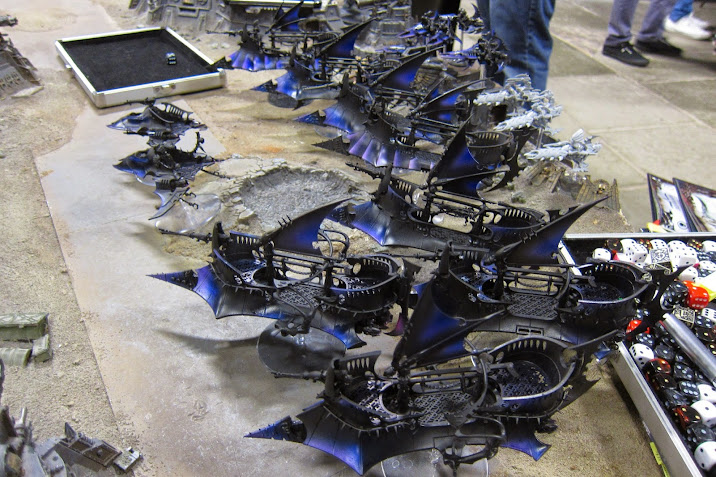 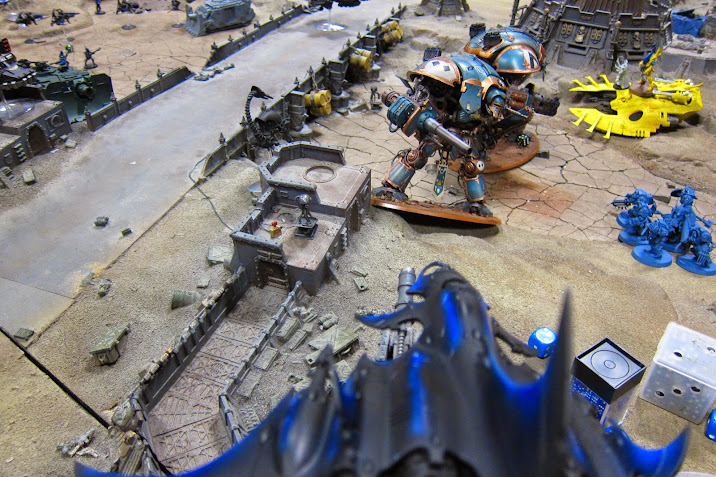 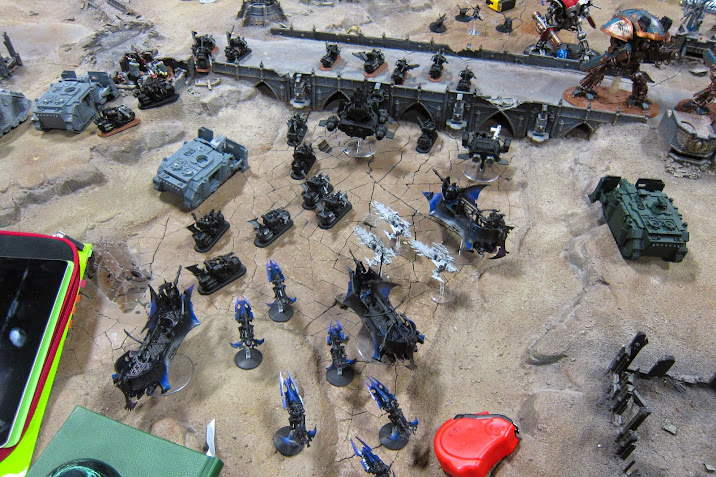 And here’s some of the infantry models with the same sort of coloration: 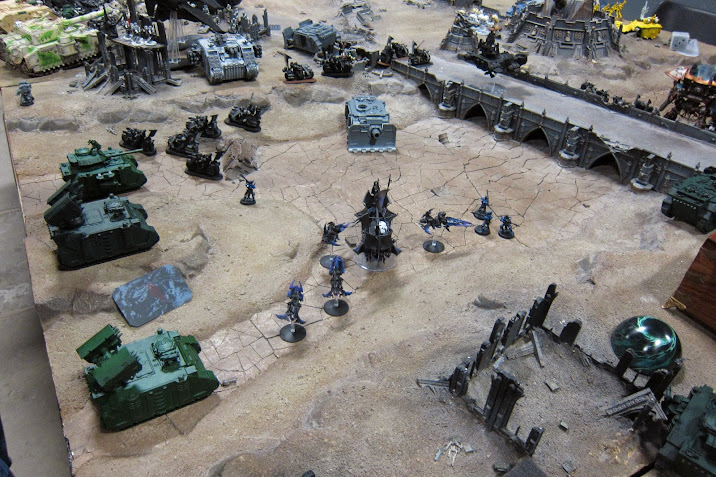 They’re a bit hard to see, which is indicative of how quickly I had to paint these up.

Once the game was finished, I wanted carry one with the models, as I want to finish painting this army before carrying on with my Tyranids or Chaos armies.

Asking for opinions on how to finish off these models, I was pointed to a couple of color scheme choosers online. The Adobe Color CC site is very nice for choosing a main color (drag the circle with the arrow in it around) or matching a particular color, then finding the various complimentary or contrasting colors, but if you want to get some quick ideas and be told what colors to use, try the great Color Palettes site.

I’ve used these types of sites before and don’t know why I forgot about these when working on colors for my own army! I decided to go with a simple ‘triad’ (that is, 3-color) scheme based on the dark blue I’ve already got, and complement the blue with small bits of green and orange. To make the weapons ‘pop’ and make them look different than the standard gunmetal color used on space marines, I would use gold on the weapons, engine intakes and exhausts and other small things like spikes.

Because the vehicles are the first thing that are usually on the battlefield, I painted up 5 of the smaller Venoms and 3 of the Raiders:

Then I trialled the orange and green on the infantry models: 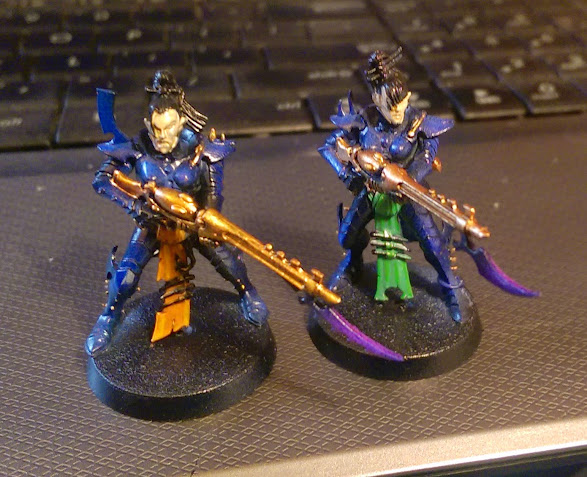 As you can tell, the models aren’t finished yet, I need to work on the skin (luckily only about 1/3rd of the infantry models are bareheaded!), paint the hair (red is the standard Dark Eldar hair color, but I have many models with purple hair) and paint the bone things that are stuck in the hair and tabards. Dark Eldar die very quickly when they’re running around on foot, so a simple pale skin tone with a light sepia ‘flesh’ wash is all I’m going to do for them. Games Workshop use a flesh tone for the tabards (because in the backstory for this army the tabards are literally flesh, skinned off unfortunate victims) but I want to color-code the squads so these test models are just trying out the scheme.

I’ll be changing the pink by spraying over it with the same blue that’s already on the models, then probably adding more blue to many of the models to brighten them up – the more Ghost Tint you put over the white, the darker the blue gets, so I can lighten the streaks pretty easily.

So – 3 more Raiders, 2 Ravagers (the same size as the Raider), 3 flyers and 38 more infantry to go! Oh, and about 10 sails (magnetized for easy storage) and 6 Reaver jetbikes too…then I have to finish spainting the many Grotesques and Incubi I made for the game…and THEN finish the army with the many special characters (Archons, Haemonculuses, Succubi, etc.). Quite a bit of work to do yet!