Having just binge-watched all 8 episodes of The Mandalorian, I can definitely say that if you’re a Star Wars fan or looking for a pretty cool space-faring action series to get stuck into, this should be right up your street.

I was worried about mentions in reviews of ‘fan service’, which can be a good or a bad thing in branded settings like Star Wars, Pixar, etc., but the little bits of that I saw weren’t in your face and were definitely noticeable for longtime fans, but not so hidden that you’ll need three extra viewings and a nerd checklist to catch everything. Last week our gaming group FINALLY had the opportunity to try out Terraforming Mars, one of the top-rated board games that you can get right now, apparently. The board game group is also the RPG (role-playing game) group, with the emphasis on RPG stuff, so it’s not too often we sit down and play a board game rather than do roleplaying. Every year or so we look back, realize that we didn’t play as many board games as we really wanted to, and collectively say we should play at least one board game each month. Which, when we meet up once a week, takes 25% of our RPG time and turns it into board game time.

I don’t mind, because I have a lot of board games that I’ve bought over the years, plus gotten through massive Kickstarter campaigns, and we’ve never played them. In fact, I’m going through a big sell-off of several board games and expansions that were ordered at the height of the hype around several campaigns. Then, of course you wait months or years, the game arrives and there’s maybe another resurgence of interest, and the hype machine moves on to the next huge Kickstarter campaign. It’s hard to keep up with, especially when you have limited room for huge boxes of board games, and when you’re not even playing them, it’s impossible to justify the cost.

Anyway…I digress. Suffice to say I’m selling off a lot of games that we sadly never got to play, so I hope they’re off to good homes. Now, let’s talk about Terraforming Mars!

In case you guys are wondering about the grass tufts I use on many of my bases, the place to get them is http://www.antenocitisworkshop.com/silflor and STAY AWAY from the Army Painter stuff unless you just can’t find the color you want in the other brand. 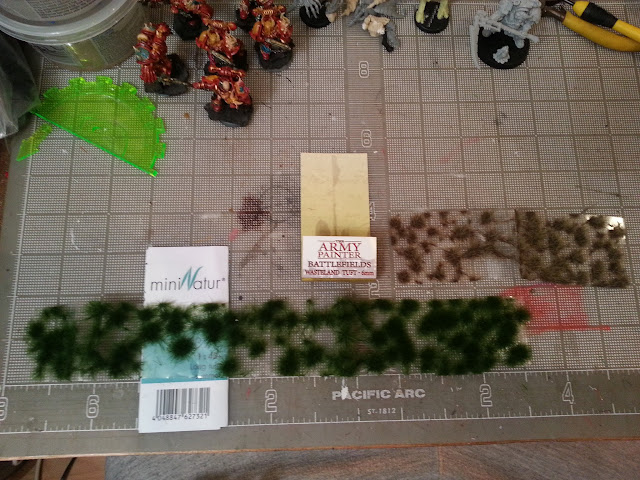